X-t(r)eam
As known the Bokkenrijders (goat riders) are prominently present in the history of these surroundings. There are quite some geocaches in this area with the same theme. From historical sources it can be noted that the first gang arose in 1730 in Wolfhagen, not far from here, and was led by Geerling Daniels. The Bokkenrijders were mainly occupied with nightly raids on farms and houses of wealthy citizens. Because they targeted multiple targets in one night far away from each other, a lot of people believed they travelled on goats flying through the air and therefore were able to quickly travel large distances.1
One story is not known very well, it is called 'The ruse of the Krekelberg'.
It was a cold and dark night in November. Geerling Daniels collected his men at his house and made plans to raid some farms in the surroundings. He proposed to go to the farm Hoeve Krekelberg. The farm was property of the family Huyn van Amstenrade at that time. One of the best known noble families of the area and Geerling knew there was a lot to find. He also proposed some other farms, he didn't know that this night would get an unexpected turn.
Just after midnight they went to the farm and with a lot of violence and noise they ran in. The Bokkenrijders had their way to get the information about the location of valuables and soon they found what they were looking for. But this night their raid was not unseen.
By coincidence someone traveling by saw the raid and alarmed the schout (local law enforcement official) and his men. One of the Bokkenrijders was on the lookout and alarmed his men at the moment he saw the schout coming. They quickly left the farm, closely followed by the schout. As a final attempt to escape they fled into the woods of the Krekelberg. Here Geerling Daniels came up with his plan. The loot, which was not that big, was put in a bag. He distributed empty bags to all his men and instructed them to hide the empty bags in the woods. Geerling hid the bag with the loot as well. By this way, hoping the schout didn't know where to look, he could collect the loot later.
The plan was executed and everything was hidden at the Krekelberg. The schout and his men found many empty bags that night, the loot has never been found. Just like the Bokkenrijders, they disappeared in the dark night. 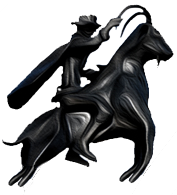